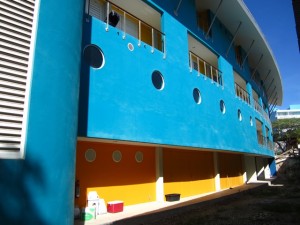 The building of the new Carmabi lab is largely completed and can now be used as accommodation and research facility by visiting scientists and students. The construction of the lab started in June 2011 and after the completion of construction around January 2013, has already accommodated approximately 100 visiting researchers and students. Starting June 2013 the facilities are open to everyone interested in staying at Carmabi for research or courses.

The new building consists of four layers. The bottom houses a kitchen, a dining room which doubles as a presentation room capable of seating up to 50 people. The second floor of the 60m long building is entirely devoted to a several research labs and a library containing a large number of unique books and journals on the ecology of marine and terrestrial Caribbean ecosystems. The third layer consists of five spacious rooms that can house up to 4 people each. The 4th and top floor consists of ten “deluxe” rooms that each have their own bathroom, shared balcony and air-conditioning. These rooms provide room for one or two people each. The large number of rooms was specifically included in the design of the new building to support large groups such as those visiting the island for courses and small conferences. 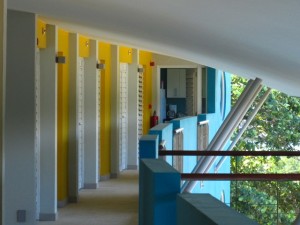 The new building oversees the old Carmabi building build in 1955 and the Caribbean Sea and its construction was made possible by funds made available from the Curacao Government through the SEI program, the Dutch Ministries of ELI and OCW and Carmabi’s own contribution. The official opening is expected to occur in November 2013.

Visitors can dive/snorkel directly in front of the station or nearby sites. Because the island is relatively small, a large number of different ecosystems can be visited during day-trips around the island and nearly all reefs are accessible from shore. Special packages are available should one want to combine a marine oriented course with historic, cultural or terrestrial aspects of Curacao. A wet lab with running seawater and 30 80x40x40cm aquaria is present. A large dry lab with basic laboratory equipment (e.g. microscopes, drying ovens, scales, basic chemical supplies etc.) is also present with 26.5m of available bench space. CARMABI presently owns three boats that are available for research purposes. Please contact Carmabi if you are planning to conduct genetic studies as such facilities will soon be available. Assistance can be provided to accommodate whatever other need exists to successfully complete research projects or teach courses. 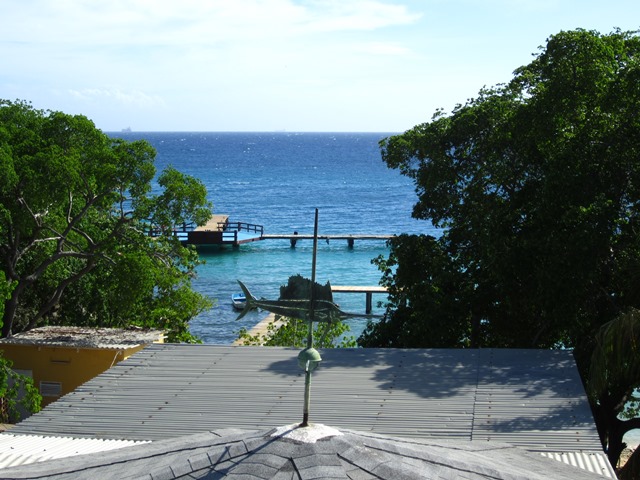 Additional information for potentially interested parties
Local ecosystems
The island of Curaçao is surrounded by a fringing reef. Since near shore development is largely absent and pollution occurs locally only near the inhabited part of the island, Curaçaoan reefs are often in much better condition relative to many other Caribbean sites. Especially the island’s undeveloped, north shore and eastern and western sides of the south shore still harbor coral communities reminding one of reef communities that existed 30-40years ago. Dense Acropora populations are still present and at the island’s eastern side, and Diadema are increasing again in abundance. Reefs are generally characterized by a 50-100m wide sandy reef flat in which scattered patch type coral communities are present. Around 8m depth, the reef flat starts to slope down to depths between 60-90m. Coral cover can be extremely high (>70%) and an approximately 65 coral species can easily be found at any site around the island. Nearly all reefs/ community types can be accessed from shore, including those in front of CARMABI. The ease by which reefs can be accessed makes them extremely suitable for more elaborate or intensive experimental approaches. In addition to its fringing reefs with a total surface of 20 km2, large inland bays can be found around the island in which mangrove/seagrass communities occur that serve as nursery areas for certain types of reef fish. The number of known fish species for Curaçao is currently 358.

uraçao (CUR) is connected to the US with direct daily 2.5hr flights from Miami (MIA), to Europe by daily 8.5hr flights to Amsterdam (AMS; Netherlands) and to South America by frequent 1hr  flights to Caracas (CAR; Venezuela). As an former Dutch colony, the island still has strong ties to the Netherlands resulting in a strong western influence on the island. The island lies outside the Atlantic hurricane belt and diving / boating along the island’s south shore is possible every day of the year. CARMABI is situated outside Willemstad, the historic capital of the island, right next to the Piscaderabay, a large inland bay surrounded by mangroves. The institute directly borders the ocean and coral reefs can be found within swimming distance. The institute provides several facilities / services to assist those interested in working on a wide variety of topics related to reef ecology/ biology in the Southern Caribbean. Assistance can be provided to accommodate whatever other need exists to successfully complete research projects or samples can be collected and send overseas to parties unable to visit the institute themselves.By means of this article, CARMABI would like to extend an invitation to interested parties to use its facilities and convenient location to conduct research in coral reef ecology on the island of Curaçao in the Dutch Antilles. Interested parties can contact the scientific department of the CARMABI institute for further information, reservations or requests at: m.vermeij@carmabi.org . See also: www.carmabi.org and click on “research station”.

Predictions for the 2022 coral spawning in the Southern Caribbean