October 27th 2009. Divers at Ocean Encounters West, a diveschool at the western tip of Curacao, found a lionfish  (see below) at Watamula a nearby divesite. The animal was captured later that day. Another one was supposedly observed  at East Point (which is the complete opposite side of the island) 2 weeks ago but  wasn’t photographed or captured. Lionfish are considered a dangerous pest (invasive species) because they are not native to the Caribbean, reproduce quickly, have no natural enemies on the Caribbean reefs (except for large groupers which are practically extinct because of overfishing), and devour large amounts of small and juvenile fish dramatically reducing recruitment of new reef fish such as snappers, groupers, grunts and parrotfish. They also have sharp highly venomous spines that cause excruciating pain when stung, and in exceptional cases can even cause death in humans. Lionfish started their conquest of the Caribbean in 1992, presumably after having been released or escaped frorm an aquarium in Florida. First they spread northwards along the coast of the US. Ten years later they jumped to the Bahamas,  a few years later to Cuba, and in just the past two years spread among all the northern islands of the Caribbean and Central America. A map of their progression can be found at the followoing website:http://fl.biology.usgs.gov/lionfish_progression/lionfish_progression.html

Because lionfish spread by dispersal of larvae that can travel great distances in the sea currents, and they live down to depths of 175 m (600 ft), it is practically impossible to completely eradicate them once they are established, with new larvae continuously coming in from distant locations. The only practicable response is to control their numbers by capturing them as soon as they are spotted. They are easily caught using two hand nets, and they are good to eat. 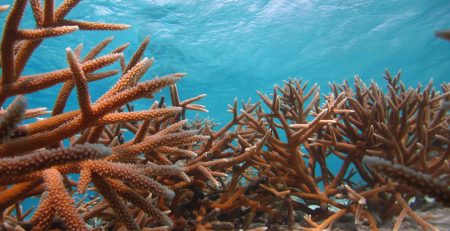